Five Fads From the Nineties Worth Forgetting 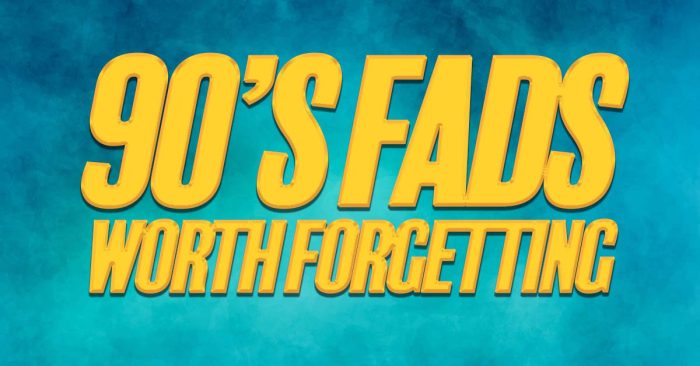 Five Fads From the Nineties Worth Forgetting

There have been memorable decades in American history. We had the Roaring 20s, the Great Depression of the 1930s, the Fabulous Fifties and the social changes and “Flower Power” of the 1960s. Then there were the 1990s. If decades are defined by the fads and fashion of the decade, the 1990s are worth forgetting. With apologies who enjoyed the decade, here are five fads that made it worth forgetting.

In part, what made this song/dance so irritating was that you just couldn’t get away from it. It was played endlessly on the radio, at high school dances, at sporting events and weddings. It also had an annoyingly long shelf life as those who perfected the “dance” just wouldn’t let it go. The good news? There really hasn’t been anything like it since. The bad news? It could happen again.

What made Grunge so interesting as a fad is that it was started as a rejection of popular culture and fads. Then, it became one. As a fashion statement, Grunge tended to favor combat boots, plaid and un-tucked shirts and an overall working class appearance. The music was dark and full of angst. Bands like Nirvana and Soundgarden replaced the more big hair, glam rock bands of the 1980s. Then Nirvana became so mainstream, they unintentionally sabotaged their own movement.

In the 1990s, teen focused shows took over the televisions across America. The list of shows focused on teenagers is legendary, including Beverly Hills 90210 whose ten seasons ran throughout the 90s. It was joined, of course, by the O.C., Saved by the Bell, Gossip Girl and in the late 90s by Buffy the Vampire Slayer. It’s hard to revisit some of these shows and not cringe, at least a little.

In the 1990s, toy manufacturer TY hit the fad jackpot when it announced it would be retiring some small, stuffed toys it was manufacturing. All of a sudden Beanie Babies, in particular, certain limited editions became super collectible and “valuable”. That is until they weren’t. Heaven knows the amount of blue plastic storage bins filled with the small toys there are in basements, attics and storage facilities across America.

To be fair, some elements of hip hop fashion from the 1990s have held on through the decades. Baseball caps, even worn backwards are still a “thing”. But those parachute pants and pants without belts that fell to the wearer’s knees, not so much. Kris Kross even made wearing clothes backwards a thing for a hot minute. The nineties were famous for fashion brands like Phat Farm, baby Phat, Rocawear, Karl Kani and FUBU.

Every decade has its moments. When it came to fads, the 1990s had more than its share of forgettable ones.