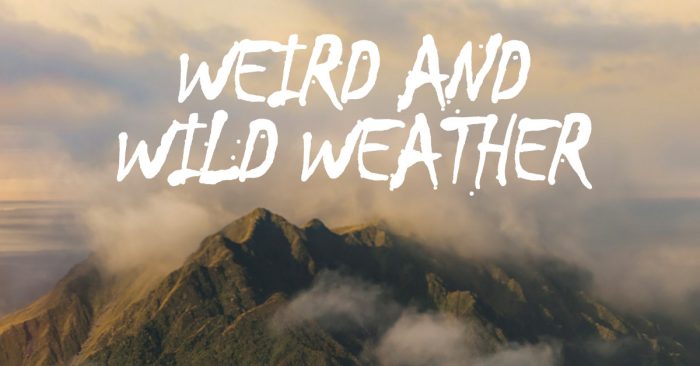 The State of Hawaii holds the record for the most rainfall in the United States within 24 hours when almost 50 inches of rain fell on Kauai on April 14-15 in 2018. That’s an average of over two inches of rain per hour for an entire day. Tax day at that.

Mount Washington, New Hampshire has the distinction of being the place on Earth to record the highest wind gusts ever at 231 miles per hour. The wind was recorded on April 12, 1934.

The highest snowfall recorded over 20 years (1985-2015) is at Mt. Rainer Washington. The average annual snowfall over those years was 265 inches. That’s over 50 feet of snow each year.

It is probably not surprising that the coldest temperature ever recorded in the United States is in Alaska. It occurred along the Alaskan pipeline at the Arctic Circle in 1971 when temps reached -80 Fahrenheit on January 23 of that year.

While not all of these have been verified it has been claimed that it rained tadpoles in Ishikawa Japan in 2009, rained fish in Kerala, India in 2009, worms in Jennings, Louisiana in 2017 and the rain of bats took place in Southwestern, Texas in 2006. The Weathergirls, a singing duo, had a hit with “It’s Raining Men” in 2007, but that too, can not be verified.

The Earliest Hurricane to Hit the U.S.

The earliest major hurricane to hit the United States was hurricane Audrey which made landfall on June 27, 1957.

The Latest Hurricane to Hit the U.S.

Is your home insured from severe weather? Will hurricane or tornado damage be covered? What about damage from flooding or even wildfires or earthquakes? Don’t take it for granted. Take a few minutes and get a homeowners’ insurance review from one of our independent insurance agents. They can not only let you know where you are covered, but where coverage may be lacking. Contact us today to get started!

The Right Recipe For Your Life Insurance Program

Car Production Facts Which You May Not Know

The Right Recipe For Your Life Insurance Program

Car Production Facts Which You May Not Know